Every January, I get this overwhelming urge to change EVERYTHING around me - the house, my style, the kids.... Sometimes it even gets me to the gym. ;)
This year, I'm feeling a need for everything to be lighter and brighter. On a limited budget (as in, zero), I'm trying to be creative - and thrifty - in my approach, so I started with one of the smaller rooms -

The Laundry Room
And by small, I really mean super tiny. My walk-in closet is bigger. No joke.
One of the biggest issues is lack of storage. There is one shelf above the washer and dryer, and I shoved a cheap bookcase into the sliver of space behind the door to hold cleaning supplies. That's it, friends. No wonder I hate doing laundry so much, right? :)

My plan is to brighten up the space to make it feel bigger, build some kick-butt storage, and then dress it all up with fun colors and storage. Here's our lovely "before", just for reference: 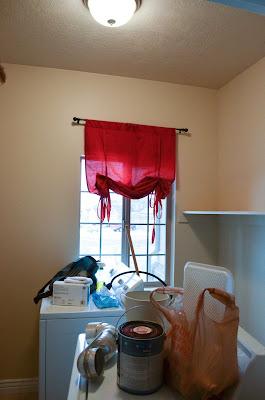 I don't usually keep the appliances in the middle of the floor. I just forgot to get a picture until after I had already started. See the boring, beige walls and woefully-inadequate curtain? Those definitely need to go, so that's where I'm starting.
I decided on Behr's Heavy Cream {at 50% of the tint} in a satin finish for the walls, and I LOVE IT! It turned out to be a creamy, warm white that's not too yellow next to the stark white of the washer and dryer.
The Ultra Premium paint has primer in it, but I highly recommend priming first whenever you're going lighter or more than a shade darker. I didn't, until about halfway through when I realized I would have to do 2 coats anyway. Plus, primer is cheaper. Like, by half.
Here's a little "after" shot for you: 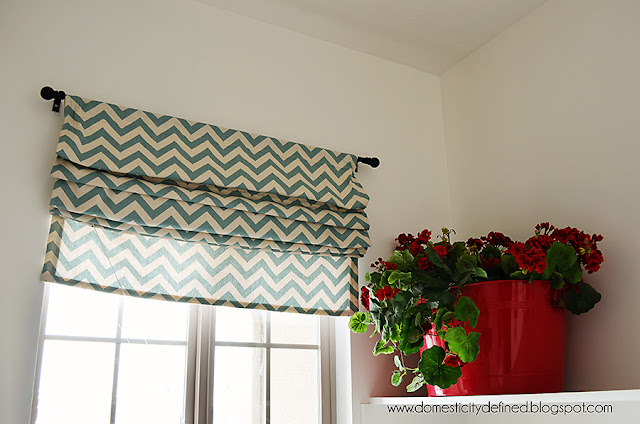 See the cute chevron Roman shade? Yep, I made that. I'd love to give you a tutorial, but I got a little impatient with taking pictures every few minutes and quit. :) Actually, there are several really good tutorials out there that I looked over before tackling my own. My favorite is this one by Brown Paper Packages: 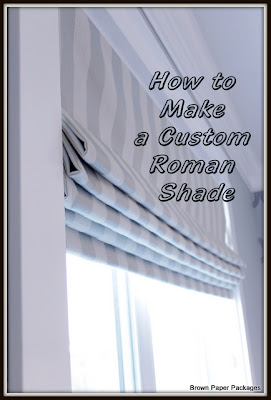 A few key changes: I already had a curtain rod up, so I didn't use a 1x2 at the top, per her instructions. I actually made a rod pocket {like a standard curtain} with a small pocket for a dowel at the bottom of the rod pocket. {The dowel holds the curtain flat at the top so it won't move when I raise it.} I didn't put a dowel in the bottom of the panel because I wanted it to hang lower, and I also made the panel wider than the window because it hangs on the outside of the frame.

So, that's the beginning of the laundry room makeover. It cost roughly $50 for paint and primer, and another $25-ish for all the Roman shade materials. I'm hoping to keep the whole makeover project around $200 or so, which doesn't sound very thrifty until you realize that it includes building a wall of custom shelving. :)  I'm super excited to get started on the storage wall {behind the door}! I'm just waiting for this early Spring coming our way - then off to the garage for some hardcore building! Whoo-Hoo!

The difference presented a balanced hullabaloo of the stray, effortlessly delivered in a house of a enunciate, well IELTS place. campsites near whitby

What are you looking for?